The Two Kinds of Decay : A Memoir by Sarah Mangusto 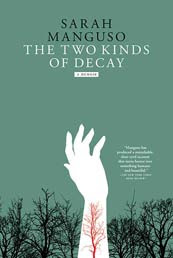 It's kinda hard to review memoirs because you're criticising people's lives, and it's doubly hard to review memoirs where the author went through something rather tragic or horrific or just plain sad, and then to turn around and be like, "Um, your life story was interesting but you did a bad job telling it."

All this being said, Manguso did a pretty good job with a difficult subject: her young life lived in a hospital. In her early 20s, Manguso discovers that within her blood a battle is raging (too much? too dramatic?), a rare disease called CIDP (Chronic Inflammatory Demyelinating Polyneuropathy) which basically requires her to swap out her "bad blood" and replace it with "good blood".

I am simplifying of course. Manguso goes into great detail about her medical history, to the point of making me a little queasy, though I'm not good with needles and blood and stuff. I was also reading it riding backwards on a bus, so that may have contributed to the aforementioned queasiness.

The book reads fairly quickly with most paragraphs a few sentences long, so even in her memoir, Manguso's poetic tendencies seep out onto the page in the form of short, clipped sentences and lots of white space.

Understandably, Manguso's life becomes so consumed by her illness that her entire identity is nearly swallowed by it. There is this one sentence that struck me where she details her time living in New York City, "I had the usual adventures people have when they move to New York." I think that sentence is telling because she no longer thinks the "life" portion of her life is important to recount because, to her, they are ordinary and relatable and everyone has the same experience when they go to New York City. Which of course is not true but these moments in her life don't make her feel special. Her rare illness makes her feel unique and while she wants more than anything to be healthy again, she also developed a kind of relationship with her sickness.

At risk of exaggerating, let me compare it to something else: a soldier coming back from a tour in Afghanistan. He/she comes back to civilian life, to maybe a family with a yard and kids and grocery stores and movie theaters and clean bathrooms and I think it's a pretty common fact that those soldiers have a hard time adjusting to "normal" civilian life (think The Hurt Locker) because the past four, five years of their lives have been consumed with war in a foreign land and no one in their life now, as a civilian, can relate to them, and they can't relate to anyone. They feel almost marooned on an island. Or maybe it's like a depressed person, who while hating their depression, also feels that if it was "cured", they would lose a certain part of what made them 'them'. I think Manguso felt this way with her disease, that her suffering (especially at such a young age which added a layer of tragedy, that her youth was also being destroyed) was both something she loathed but also discovered it made her different, that illness became a new kind of normal, a new kind of healthy.

"And then sometimes I think I've made everything happen, starting with making myself be born." pg.22
"The doctor was older than my parents, and he must have had plenty of younger patients, but he didn't understand yet that suffering, however much and whatever type, shrinks or swells to fit the size and shape of a life." pg. 83-84

"How sure our neighbor was that her suffering was the only kind of suffering. And how sure I was that mine was worse." pg.128

Reviewed by Schuyler
Posted by Burke's Books at 2:24 PM

Email ThisBlogThis!Share to TwitterShare to FacebookShare to Pinterest
Labels: memoir