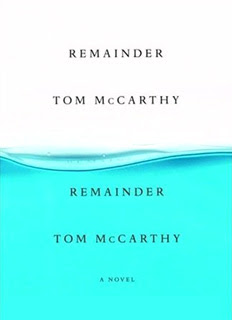 About half way through, I'm thinking to myself, "Wait, this is pretty much like Synecdoche, New York by Charlie Kaufman." And so I did a little research and in an interview, Kaufman is asked about Remainder and says he had never read it and in fact, wrote his screenplay well before the book was published. Weird.

So the main characters comes into some money (about 8 1/2 million pound, so that's like what? $16 million USD?) after a lawsuit involving him being injured by something falling from the sky. He decides to use the money to try and re-create and re-enact certain moments from his life, both past and present, moments that he feels are "pure" and "true" and in turn, give him a sense of happiness. He feels that everyday life has become too staged and stilted and is tainted with people posing and being aware that they're posing...so naturally, in order to get around this, he hires "re-enactors" to help him stage these moments. He creates "sets", down to the most minimal detail. Obviously, to the reader, this feels a little contradictory in terms: dissatisfied with the posed feeling of "real" life, one decides to instead stage moments from "real" life and replay them on a near continuous loop, so as to achieve a sort of truth (or maybe Truth).

I'm not saying this negatively, it's just something I noticed. I thought all the loopy logic, that as the novel goes on, just basically turns into a funhouse hall of mirrors, was great. I love that kind of stuff. It was repetitious at times but in a way that was oddly comforting. Like you're right there with him, watching him build this world, construct his own version of joy. These re-enactments become a sort of religion to him:

"I and the other re-enactors were like a set of devotees to a religion not yet founded: patient, waiting for our deity to appear, to manifest himself to us, redeem us; and our gestures were all votive ones, acts of anticipation." pg. 282

"To be real- to become fluent, natural, to cut out the detour that sweeps us around what's fundamental to events, preventing us from touching their core: the detour that makes us all second-hand and second-rate." p. 264

I usually don't like British writers, well, just the ones I've tried to read I guess, but McCarthy won me over. I hope you're proud of yourself Sir. And also the ending kicks ass.

Reviewed by Schuyler
Posted by Burke's Books at 2:11 PM