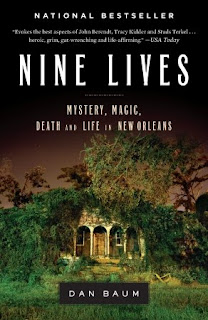 I've been kinda obsessed with New Orleans lately, in particular, Hurricane Katrina and life post storm. I just finished The Great Deluge by Douglas Brinkley before reading Nine Lives and it was a great primer. While The Great Deluge has plenty of harrowing, courageous stories, it is more fact based, as it should be. Nine Lives is far more character based, with Baum's prose reading almost like fiction. It deals largely with life in New Orleans, pre-Katrina, following the story lines of nine individuals from varying backgrounds. A wealthy coroner/doctor. A police officer. A high school band teacher. A transexual barkeep. And so on.

Baum's overall push is to establish that New Orleans is not like the rest of America. It lives life at a different pace, not consumed with "the clock" or "chasing the dollar". Baum insists that New Orleanians are slow to accept change, and really don't want change. The city comes off as almost other worldly and time seems to linger in its streets a little longer than other cities. Though New Orleans comes off as mysterious and magical, it seems to come at a price. In order to have this slow moving, metropolitan paradise, it seems that it must have a yin to its yang: the crime, the corruption, etc etc etc. Can New Orleans, as it has been known, with all its history and eccentric culture, exist without its underbelly? Who knows. But Baum gives us a little glimpse into why people make New Orleans their home, regardless.

Reviewed by Schuyler
Posted by Burke's Books at 2:02 PM