The Rehearsal by Eleanor Catton 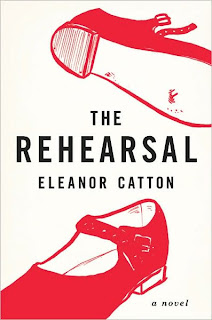 A teacher has an ambiguous relationship with a student and the high school is thrown into a vortex of uncertainty, reinvention, and sexual awakening. And the local drama school, simply the Institute, chooses to use the scandal as the basis for its end of the year production. As the novel progresses, you as the reader begin to realize that you're never really sure when you're reading a re-enactment at the Institute or whether it's the real life narrative. And would it matter? And as the Institute drama students hone their acting craft, the students of the near by all girls school begin to realize they have acting abilities of their own, feigning concern and sympathy and compassion in wake of the scandal. Catton's got skills, no doubt about it.
Sloppy or complex? I'm going to bet complex. Upon the first reading, I felt a bit befuddled but all the while, I could see certain patterns emerging and I knew that a second reading would make everything more clear. Though not completely clear because I think Catton wants their to be some measure of blending, a murkiness between the stage and the audience, leaving the reader to question where the play ends and reality begins. Of course that is a technique as old as Shakespeare, the play within a play type scenario, but it never fails to captivate my attention. I guess I just like the disorienting puzzle-like qualities of it all. Also, Stanley's father was a fantastic character.
"Later Stanley would arrive at the opinion that girls were naturally more duplicitous, more artful, better at falsely sheathing their true selves; boys’ personalities simply shone through the clearer. It was that female art of multi-tasking, he would conclude, that witchy capacity that girls possessed, that allowed them to retain dual and triple threads of attention at once. Girls could distinguish constantly and consciously between themselves and the performance of themselves, between the form and the substance. This double-handed knack, this perpetual duality, meant that any one girl was both an advertisement and a product at any one time. Girls were always acting. Girls could reinvent themselves, he later thought, with a sour twist to his mouth and his free hand flattening his hair on his crown, and boys could not." pg 71
"At high school they expect answers, but at university all you're supposed to do is dispute the wording of the question. It's what they want. Ask anyone." pg 99
"But if she doesn't know she's lying and nobody else knows that she's lying, and she's got this real memory in her head...then it might as well be true." pg 101
"The other students all said, 'Esther is so funny!' and 'Michael is so bad!,' and just like that each won the double security of becoming both a person and a type." pg 114
Reviewed by Schuyler
Posted by Burke's Books at 2:59 PM