Review: A Visit From the Goon Squad by Jennifer Egan

When I began reading this, I almost put it down several times. I had heard so many good things about it, from people and blogs and critics I respected. I was skeptical though. I didn't like the cover. I didn't really like the title. And the plot didn't seem that interesting to me. I just imagined it was going to be some kind of bildungsroman thing sprinkled with lectures on punk rock.
Well, let me just say that I'm glad I stuck with it. It took me a little while to get into but after I shed all my preconceived notions, it turned out to a damn fine book. It's doesn't have a traditional narrative arch (thank God) with each chapter devoted to one character, with each story directly, or sometimes indirectly, related to previous chapters and their characters. So it's a little more short-story-ish in format than it is novel. Like a really tight, super connected short story collection. Egan also blends enough satire and literary trickery to keep things fresh and engaging, including an entire section told through a teenagers Power Point journal, which was, oddly enough, way more genuine than I thought possible.
So it kinda ends up being about music, but not in that slightly annoying way (think Perks of Being a Wallflower, think Love is a Mixtape). And time ends up being the goon. And the only reason I didn't like the cover is because I thought it was going to be an annoying diatribe about the death of music and the only real music is punk rock, etc.
The cover was misleading. But I'm not gonna stop judging books by them. What would happen if we went back to the age when books didn't have dust jackets? Like it was just the title and author on the spine and that's it? How would those sell in the now heavily image-based consumer culture, where the image is king? Cause now probably like half the reason a customer will decide on one book over the other is because it has a better cover, right? I know I've done it. This all being said, book covers has evolved into this strange art form. I don't know about you, but I think book covers are freakin' beautiful nowadays. But I digress.
So read this book please. I liked it a lot.
reviewed by Schuyler
Posted by Burke's Books at 2:40 PM No comments:

Email ThisBlogThis!Share to TwitterShare to FacebookShare to Pinterest
Labels: a visit from the goon squad, jennifer egan

Baking Cakes in Kigali by Gaile Parkin
308 pages
$15
Our new book group selection for October Will be Baking Cakes in Kigali by Gaile Parkin. In Parkin's debut novel, we are transported to Rwanda and the kitchen of Angel Tungarza. Her modest kitchen becomes a safe haven and "oasis" in Rwanda, "where visitors stop to order cakes but end up sharing their stories, transforming their lives, leaving with new hope."
The book group will meet October 28th at 7:00pm for discussion. All are welcome!
Posted by Burke's Books at 2:28 PM No comments:

Come by the store and check out these new releases, fresh off the presses (well, for the most part):
Freedom by Jonathan Franzen- His first novel since The Corrections, Franzen tackles the subtle complexities of the mid-western family again, while dealing with the overarching theme of freedom in our modern lives.

C by Tom McCarthy- Short-listed for the Man Booker Prize this year, McCarthy's newest novel chronicles the life of Serge in the early 1900s. Radio gadgets,WWI, Egyptian espionage, love affairs in ancient tombs. And fiction pushes on.
Juliet by Anne Fortier- A reinvention a Shakespeare classic, we follow Julie, who discovers upon her Aunt's death, that she is really related to the real life family upon which Romeo & Juliet was based. And the feud is alive and well.
The Wave by Susan Casey- Everything you've ever wanted to know about the giant, rogue waves of the ocean...and the people who dare to ride them.

Ape House by Sara Gruen- From the author of Water for Elephants comes this intriguing tale of apes, language, and what exactly it means to be human.

The Thousand by Kevin Guifoile- A conspiracy laced historical thriller that puts The Da Vinci Code to shame. To shame I say! 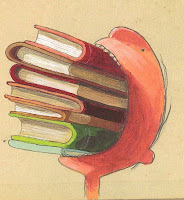 Book Group will meet in-store, Thursday, September 23rd at 7:00pm to discuss My Stroke of Insight by Jill Bolte Taylor. Come for the lively discussion, stay for the new book selection. As always, book group members recieve a 20% discount on our new selection!
Posted by Burke's Books at 11:21 AM No comments:

Our in-store writing group will now begin meeting Thursday nights, instead of Monday nights.
Here are a few of the future dates:

All are welcome. Bring your fiction, non-fiction, poetry, or whatever you'd like to share. The atmosphere is positive and encouraging, so don't be scared! Embrace your inner writer.
Posted by Burke's Books at 11:00 AM No comments:

Explore Your Inner Author at Our Writing Group

Come join our in-store writing group! Bring your fiction, non-fiction, poetry, journalism, or whatever you're working on. It is a relaxed, positive, and encouraging atmosphere. We meet this Monday, September 20th, from 7:00pm-8:30pm. All are welcome!

Posted by Burke's Books at 1:35 PM No comments:

Huh. Ya know, I didn't know if I was going to like this novel. I tend to have a hard time getting into "period" novels, which this kinda is, taking place from about 1891 to 1950s. But it's a testament to John Williams and his storytelling abilities that he was able to take a simple story about a passionate, though ultimately ordinary, English professor named William Stoner and turn it into an compelling tale of a life fully lived...or at least attempted.
Pretty much everyone on The Millions (.com) is in love with this novel and it's been called "the perfect novel" by more than a few respectable literary types. Perfect? Well, I don't really even know what that means. Is there some sort of Perfection Checklist for the novel? Entertaining. Check. Clear, fluid, and often gorgeous prose. Check. Funny. Check. Sad. Check. Main Character is dignified and near heroic in his quiet struggles, though also we can't help but feel a little sorry for him. Check. Wait. It is the perfect novel!
But seriously, it was pretty awesome. I don't think there was a single scene, or a single page, where I checked out mentally and started thinking about what I was going to make for dinner or whether or not I should play Batman Arkham Asylum on the XBox360 before bed. I cared about William Stoner. I cared about his small, human plight. I wanted Stoner to die (as we knew he would by the first page) happy. And I believe he did. Take the time to read the below quotes to get a taste of aforementioned 'gorgeous prose'. There, I made it through the entire review without making a lame pot joke.
Quotes:

"He was forty-two years old, and he could see nothing before him that he wished to enjoy and little behind him that he cared to remember ." pg. 181
"They [Stoner and his daughter] talked long into the night, as if they were old friends. And Stoner came to realize that she was, as she said, almost happy with her despair; she would live her days out quietly, drinking a little more, year by year, numbing herself against the nothingness her life had become. He was glad she had that, at least; he was grateful that she could drink." pg. 248
"On an impulse he switched out the light on his desk and sat in the hot darkness of his office; the cold air filled his lungs, and he leaned toward the open window. He heard the silence of the winter night, and it seemed to him that he somehow felt the sounds that were absorbed by the delicate and intricately cellular being of the snow. Nothing moved upon the whiteness; it was a dead scene, which seemed to pull at him, to suck at his consciousness just as it pulled the sound from the air and buried it within a cold white softness. He felt himself pulled outward toward the whiteness, which spread as far as he could see, and which was a part of the darkness from which it glowed, of the clear and cloudless sky without depth. For an instant he felt himself go out of the body that sat motionless before the window; and as he felt himself slip away, everything-- the flat whiteness, the trees, the tall columns, the night, the far stars-- seemed incredibly tiny and far away, as if they were dwindling to a nothingness. Then, behind him, a radiator clanked. He moved, and the scene became itself...He walked slowly home, aware of each footstep crunching with muffled loudness in the dry snow." pg. 180
Posted by Burke's Books at 1:25 PM No comments:

The most prestigious literary prize in the merry land of England is about to be awarded and here is the narrow field of nominees:

Parrot and Olivier in America by Peter Carey

In a Strange Room by Damon Galgut

The Finkler Question by Howard Jacobson

The Long Song by Andrea Levy

Posted by Burke's Books at 1:41 PM No comments: